Made It – Python Is Top Language On TIOBE Index


We have been anticipating Python reaching the top position in the TIOBE Index for quite a while and this month, October 2021, it has happened and probably marks the beginning of a long reign for a language that has well-deserved popularity.

Movement at the top of the TIOBE Index is indeed newsworthy as it is a rare occurrence. TIOBE Software’s CEO Paul Jansen states in his monthly update:

For the first time in more than 20 years we have a new leader of the pack: the Python programming language. The long-standing hegemony of Java and C is over. Python, which started as a simple scripting language, as an alternative to Perl, has become mature. Its ease of learning, its huge amount of libraries, and its widespread use in all kinds of domains, has made it the most popular programming language of today. Congratulations Guido van Rossum! Proficiat! 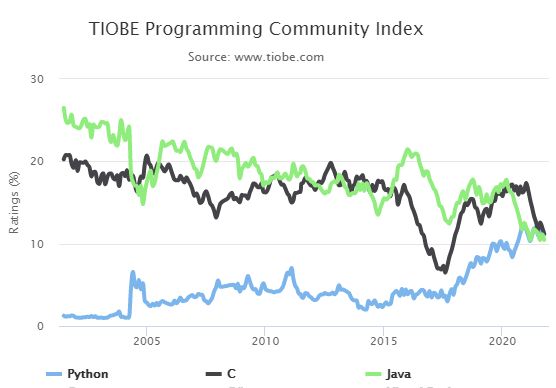 Given the way this index works they may be an element of self-fulfilling prophesy – we’ve all be talking about when Python will come top on TIOBE that we’ve kept it in the news.

Python was already at the top of the IEEE Spectrum’s rankings – taking pride of place in September for the fifth year in a row, see Python Tops Language Rankings – Again. And in August we reported Java and Python Again Share Second Place In RedMonk Rankings, with first place going, as always to JavaScript,.

There’s no doubting that Python is popular.  As  I reported in What Makes Python Special?

“[Python] is the most widely used language for teaching computer science and is the language that people who don’t already use it most want to learn.”

What did come as a surprise last year is the extent to which people want to learn Python when we reported on an exercise from Specops Software that revealed a huge margin between the number of searches for Learn Python and the next most popular language to learn which was Java.

Python does merit its popularity. As Mike James wrote in 2019 in  Python Set To Be Top Language:

With Python you can start using it as if it was a non-object-oriented scripting language and later you can be amazed that all along there were objects, classes and even meta-classes. It’s a powerful, sophisticated and modern language that pretends to be as simple as Basic when you first meet it.

This month has seen the release of Python 3.10, a full decimal point release of the language and in our report on it Mike James referred to some welcome improvements but nothing major. This is in no way a criticism, Python is now a mature language and there’s not much that needs doing to it. I also mentioned Guido Van Rossum’s opinion that there was unlikely to be a Python 4. That too is good. It means the language is likely to stay stable. This may mean we stop talking about it quite so much but I do hope it can maintain its status as the #1 language on TIOBE. 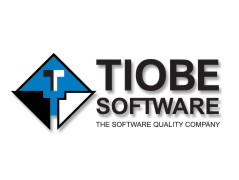 Python 3.10 Is The New Standard

What Languages Do Devs Want to Learn?

Python Set To Be Top Language